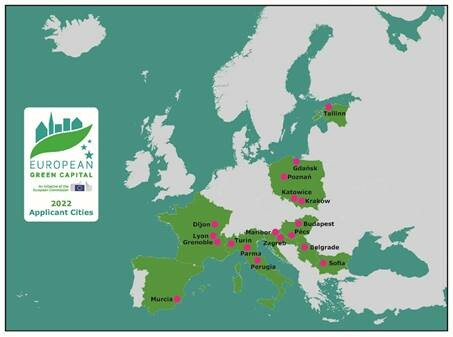 Cities in Europe are increasingly choosing to become more sustainable. 36 cities and towns from 18 European countries are competing for the European Green Capital 2022 and European Green Leaf 2021 Awards. In the 13 years of the initiative’s existence, this is the highest number of cities so far to enter the competition.

The Awards showcase cities and citizens successfully responding to urban environment and climate change challenges. This year, the competition attracted entries from all over Europe, in particular from southern and eastern countries. The majority are first-time applicants, with 23 newcomers amongst the 36 entrants.

Karmenu Vella, European Commissioner for Environment, Maritime Affairs and Fisheries said: “We are in an ecological and climate crisis. Cities are on the frontline of climate change and nature loss, and the frontline of how to improve the situation. That is why I am so heartened to see a record number of applicants for European Green Capital and European Green Leaf Awards this year. European cities increasingly understand that by going green they can offer a good quality of life to their citizens and protect their businesses from environmental risks. But the title comes with a great responsibility – a responsibility our network of winners takes very seriously. A winning city is a lifetime, global ambassador for Europe’s environmental leadership. Cities from all over the world, including New York, are now learning from our European cities who are leading the way in environmental transition.”

A panel of twelve independent experts will now begin a technical assessment of each application to select a shortlist of finalist cities for both awards. The panel will assess the European Green Capital applications on the basis of 12 environmental indicators: climate change mitigation; climate change adaptation; sustainable urban mobility; sustainable land use; nature and biodiversity; air quality; noise; waste; water; green growth and eco-innovation; energy performance; and governance. For the European Green Leaf Award, the expert panel will assess the applications based on six environmental topic areas; climate change and energy performance; sustainable urban mobility; nature, biodiversity and sustainable land use; air quality and noise; waste and circular economy; and water.

The finalists for both awards will be announced in the spring 2020, after which they will be invited to present their case to an international jury. The jury will evaluate the cities’ commitment to sustainable urban development, their capacity to act as a role model to other cities and their strategy for communicating and engaging with their citizens. The winners will be announced at an awards ceremony in June 2020 in Lisbon, which is the European Green Capital for 2020.